Luann Koester will be at Macdonald Book Shop

Visit Macdonald Book Shop September 10, 2021 to meet Luann and check out her children’s book. Luann will be outside in our courtyard between 12 and 4 pm on Friday, personalizing copies of her book. 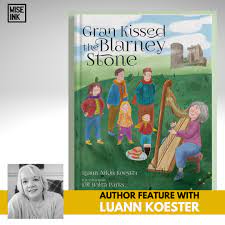 Girly and Scamp can’t imagine what has come over their once ordinary Gran after her trip to the green island of Ireland where she kissed the Blarney Stone. Whatever it is, though, they sure do like it! Now Gran tells them silly stories she swears are true. When she does her chores, she twists and twirls, sings and swirls cheerfully. But she isn’t their normal Gran, and Gramps, Daddy, and Mama are worried. Gran Kissed the Blarney Stone is the charming tale celebrating the love and joy that exists between grandparents and their grandchildren. Gran Kissed the Blarney Stone is a wonderfully lyrical story filled with shenanigans, malarkey, and plenty of blarney.

Gran Kissed the Blarney Stone offers children and families more than just a charming, poetic read. Adrienne Vaught, author of The Little Red House, writes that”[Gran Kissed the Blarney Stone] is full of educational tidbits about another culture.” Emma Parrish, library assistant and a children’s interactive activity creator on YouTube, believes this little book will have a wide appeal. She explains, “I work in the youth services department of a public library that serves homeschool families looking for books about history, geography, and different cultures. I think this little book will not only appeal educationally to these families, but also those children and families simply interested in how Ireland is represented in children’s fiction. It is a fine book for reading to children and a great choice for the more advanced reader who wants a challenge in addition to pictures.”

Elif Balta Parks’ bright, lively illustrations, capture the personalities of each character, from silly, carefree Gran to forehead smacking Gramps, and giggling Scamp. Kylie Noojin, graphic artist and Art Manager at Gallup (Omaha) explains “[t]he illustrations enhance the arch of the story and capture the whimsy of Gran’s adventures in Ireland and her silly exploits at home.

Author and educator, Koester has taught high school language arts for over 26 years, as well as college composition. A fellow of the National and Colorado Writing Projects, she considers herself a writer teaching writers.

Recently retired, Koester enjoys teaching, traveling, spending time with her immediate and extended families, writing, and playing golf. In addition to Gran Kissed the Blarney Stone, she is a published poet and novelist. A Gran to four girlies and a scamp, Koester lives on a cattle ranch near White Butte Creek in Northeastern Colorado.